“Dear children, our hands are a symbol for our hearts and only open, generous hearts can change the world.” Pope Francis

Why does God let children suffer? How can kids change the world? And how can they overcome their fear of growing up?

Those were the soul-searching questions that three children asked Pope Francis during a meeting with members of an organisation for middle school students called ‘I Cavalieri’ or The Knights. The colourful encounter included young knights from all over Italy, along with groups from Spain, Portugal, France and Switzerland, plus others linked up online from Latin America.

After lots of lively singing and cheering, a young girl named Marta asked a first question about how to overcome her fear of moving to high school and saying goodbye to all her current friends. 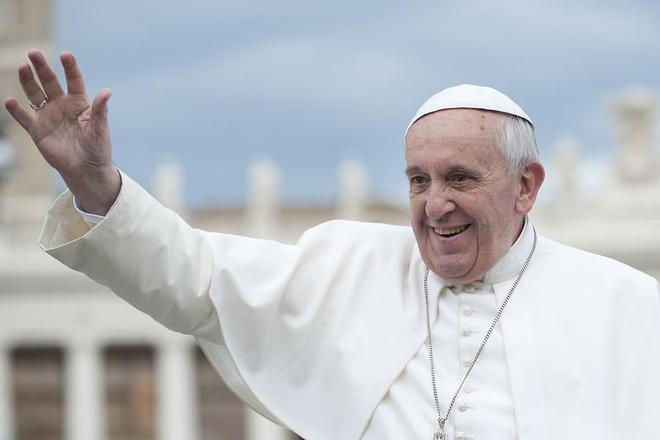 The Pope told her that life is a continual round of big and small ‘hellos and goodbyes’. We grow up, he said, by making new friends and letting go of old ones. Don’t be frightened, he said, but try to see it as a challenge. Don’t worry about what’s behind the wall, but imagine instead a horizon you can see in the countryside and try to always move forward towards your new horizons.

A second child, Giulio, asked the Pope how young people can help change the world for the better.

Getting the kids to shout out answers, Pope Francis asked what happens if they have two sweets and a friend comes to call? And if they only have one sweet? Do you put it in your pocket and eat it later? Or do you share what you have with others? Show me your hands, he instructed the kids: are they closed and selfish, or open and generous? Our hands are a symbol for our hearts, he said, and only open, generous hearts can change the world.

If you have a friend at school that you don’t like, the Pope went on, don’t go and gossip about that person with others, because that shows you have a closed heart. If someone insults you, don’t insult them back, but try and change the world with small, every day, acts of generosity and solidarity. Jesus taught us to pray for our friends and our enemies, for those who make us suffer, he said, just as Our Father in heaven makes the sun shine upon good and bad people.

Finally a young Bulgarian boy, Tanio, told the Pope how he’d been abandoned in an orphanage and adopted by Italian parents at five years old. His new mum died a year later, leaving his dad and grandparents to look after him. Now his grandparents have died too, so he asked the Pope: How can we believe that God loves us when we lose people in this way?

Pope Francis confessed that he too asks the same question when he visits sick children in hospital. How can we believe in God’s love when we see kids suffer from hunger in some parts of the world, while so much food is wasted in other places? There are simply no words to answer these questions, he told his young audience. The only explanation you may find is in the love of those who support and care for you.

God doesn’t answer my questions either, he admitted, but when I look at the Cross and remember that God let his own Son suffer, I know that there must be a sense to it somewhere. I can’t explain it to you, he said, but you may find it on your own. Remember, he concluded, there are questions and situations in life which cannot be explained, yet the love of God is always there, and people around you can help you feel his presence in your life.