As part of our Catholic Life Project for Summer 1, we thought more about how we could be stewards of the earth and in particular of our school environment. As a year group, we scheduled time to tidy up our school grounds using litter pickers. It was amazing how much litter we found in the bushes, grids and the pedestrian zones around the site!

On our trip to Apedale, we explored a coal mine and learnt about how coal is mined and how it can be used as an energy source. We then discussed why coal is no longer mined in Newcastle-under-Lyme and which energy sources we use today. Also, we visited the Apedale museum and learnt about the Industrial Revolution. We participated in a guided tour of the woodland area and discussed how coal was transported around the UK. Finally, we explored Apedale and walked to the top of the hill to visit the Apedale coal mining monumets.

Congratulations to Evelyn in 5H who is second first child at St Mary’s to read 1,000,000 words! What an amazing achievement which really showcases her dedication and love of reading! #EnglishSTM

As part of our celebrations for the Queen's Platinum Jubilee, the children spent time creating a portrait of Her Majesty. We used a YouTube video to follow step-by-step instructions on how to create the perfect picture. We think we did a rather splendid job!

Congratulations to Nina in 5H who is the first child at St Mary’s to read 1,000,000 words! What an amazing achievement which really showcases her dedication and love of reading!

This term Year 5 will be learning all about the Ancient Greeks. To start off the unit, we all came to school dressed in togas. In English, we began our new text 'Who Let the Gods Out?' and were introduced to an interesting character called Mr Boil. In the afternoon, we competed in a mini Greek Olympic Games and embarked on a journey with Now Press Play. The children and adults had an amazing first day back after the Christmas break!

Year 5 visited St John Fisher as part of their transition to high school. They designed their own coat of arms in history and cracked a marvel code in order to save the world in maths! The other Year 5 class enjoyed a D&T session where they had to create a strong tower that would hold an egg. The tallest tower, that could remain standing for 10 seconds, won the competition.

Year Five and Six have completed a number of activities as part of #HumanRightsDay2021. They debated a number of current issues and how we, as Catholics, have a responsibility to speak out for those who cannot do so for themselves.

Today, Year 5 have been to Newcastle College to visit the Health and Social Care department. We were enjoying Christmas craft activities but with a twist. We experienced how different it would be to communicate with either a visual or hearing impairment. The children found this an extremely informative experience.

Thank you Newcastle College for having us!

Year 5 were lucky enough to get their hands on some authentic Viking armour. They experienced how heavy the chainmail was and struggled to even pick it up - never mind try it on! The children did, however, get to wear the helmet and use the sword. Both items were also very heavy so we discussed how hot and tired the warriors must have been during the gory battles.

Year 5 visited the Cenotaph in Newcastle Town Centre. Together, we shared a special prayer of remembrance and had one minute of respectful silence. The children also met a representative from the Staffordshire Regiment who showed the class the sword which was given to him by the Queen for remembrance services. The children were extremely respectful and were fascinated by the sword.

Well done to Evelyn (Y5), Aysia (Y2) and Victoria (Y6) who correctly guessed the book when they took part in BBC Radio Stoke’s 'Book Club, Duck!'. They listened to clues about a mockingjay and said that they believed the book to be 'The Hunger Games' by Suzanne Collins. 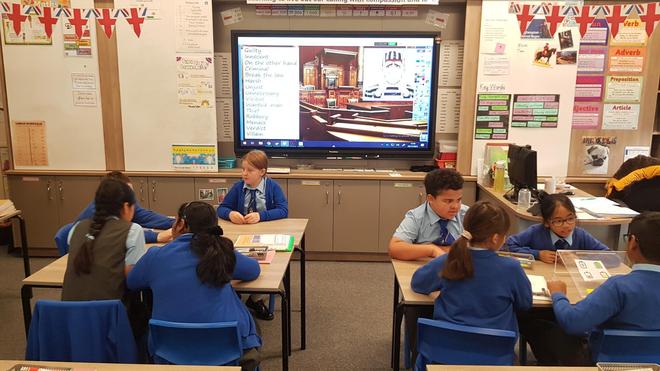 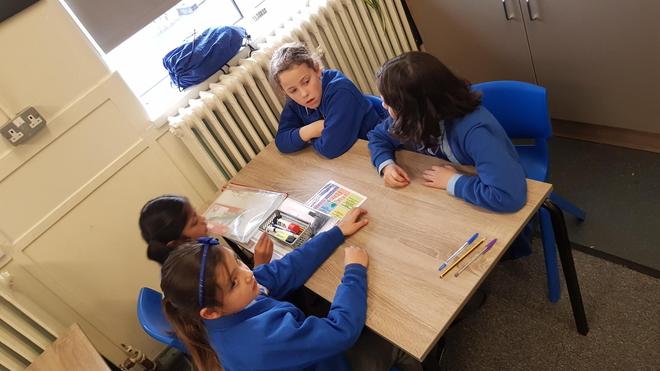 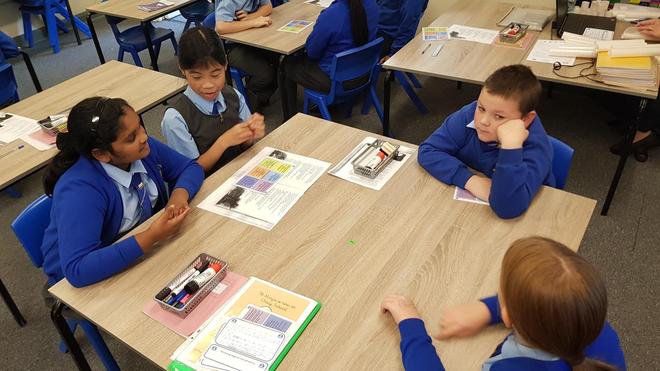 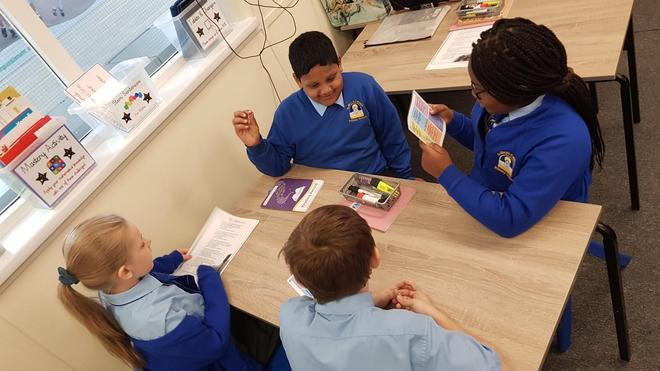 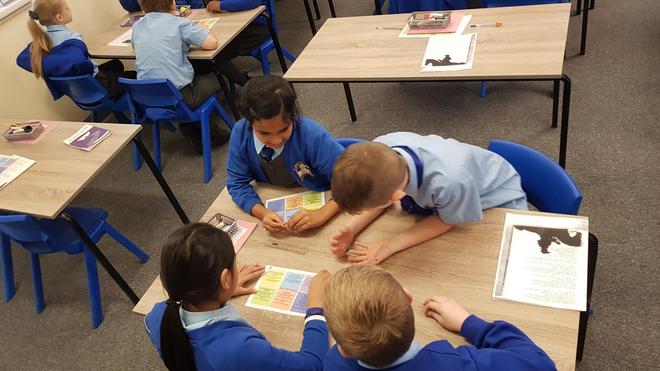 The children enjoyed taking part in a controversial debate in class. They used their oracy skills and sentence stem mats to debate whether they thought the Highwayman should have been killed for his crimes. It was interesting to see the difference in opinions ranging from those highly in favour of the death penalty and those opposed. The children practised how to politely disagree with each other or add to each other's points. It was a very heated debate!

David, from CAFOD, came in today to do a workshop on Catholic Social Teaching with us. The teachings are rooted in scripture but guide us on how to live out our faith in the world. We learnt all about how the work of CAFOD all over the world focuses on many of the teachings but particularly 'Option for the Vulnerable' and 'Dignity of Work and the Rights of Workers'.
Our activity was to look at scenario cards and closely match them to the teachings. We found that many of them overlapped and could be placed in two categories.

Today's worship had the theme of Thankfulness. The children heard a passage from Psalms which taught them about God's never ending love ‘Give thanks to the Lord for he is good, for his love has no end’. The children thought about what this message meant for us today and why we should be thankful for this, particularly in the current pandemic. We also took time to think about the people in our lives for whom we are thankful. Thank you to our worship leaders.

Today, the children in Year 5 had the ultimate Viking experience using Now Press Play. They put on their pink headphones, were immersed into a Viking land and given the following mission:
'Food is scarce in the Norse lands, and you and your sister, Freja, have heard tell of other Vikings travelling to England to start a new life. Led by the village headman Grim, however, some of your fellow villagers are more intent on pillaging and stealing than settling alongside your new Anglo-Saxon neighbours. When Freja is captured by King Alfred, you’re pulled into the fray. Can peace prevail?'

All children had a thoroughly enjoyable time and can't wait for their next Now Press Play experience. 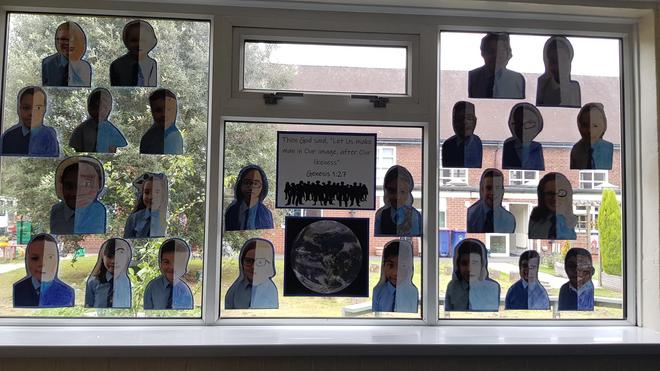 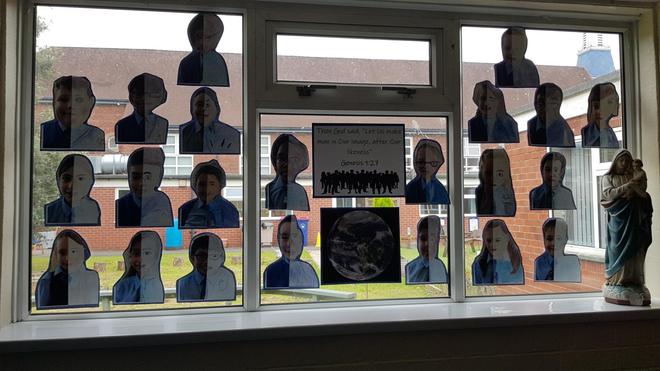 In RE, we heard about the beginning of the world and how God created our planet in seven days. We shared our amazement at this creation and discussed how God created us in His image and likeness to rule over plants and animals. We created pieces of art based on his most special creation to display in our corridors.

Year 5 celebrated the birthday of Our Lady by reflecting on the important stages of Mary's Life. We discussed how she played a huge role in making Jesus the man he was and how difficult it must have been for her to say 'Yes' to God.

In our first week back at school, Year 5 thought looked at women across the world who inspire them. We focused our study on people who were working hard to fulfil their duty to protect God's Creation. This led us to the work of Greta Thunberg and her passion for preventing the effects of climate change. We wrote a fact-file about her life so far and thought about what we could do to reduce our impact on the planet!